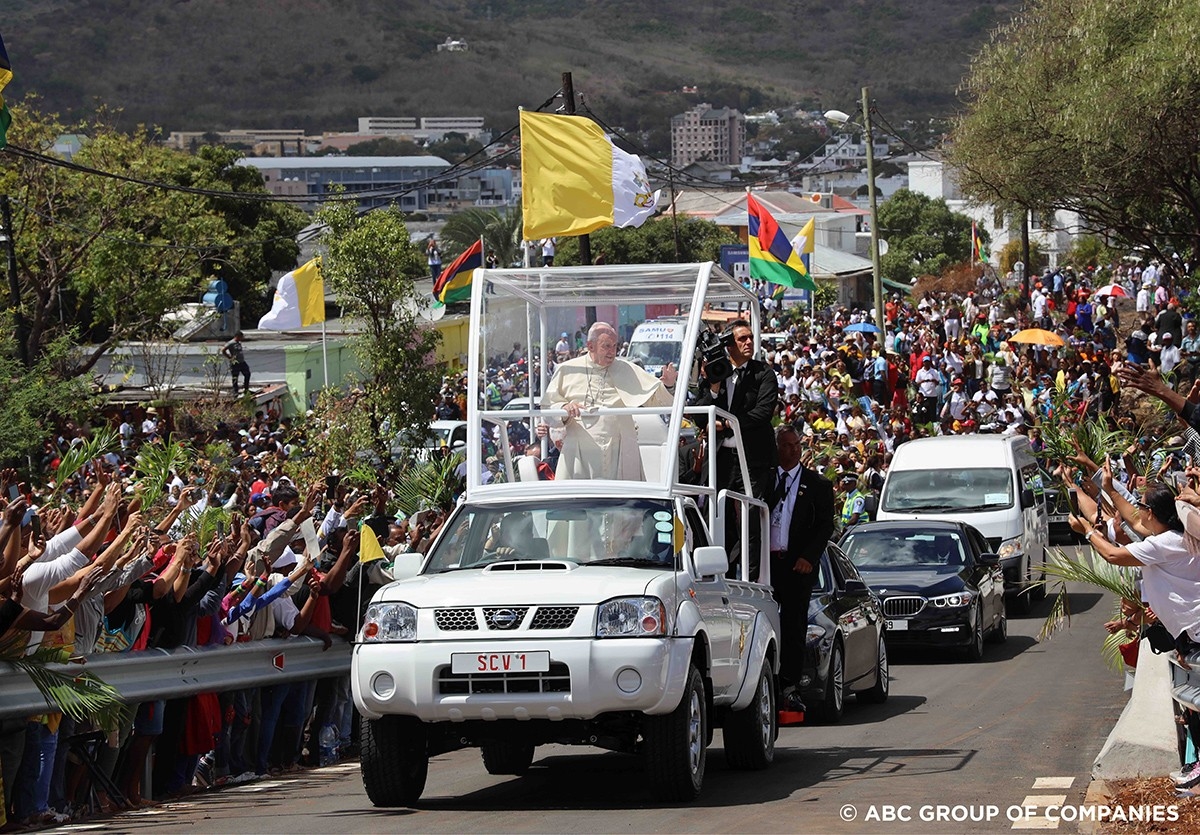 Pope Francis made his final stop at the Indian Ocean island of Mauritius during his three-country visit to Africa in September 2019, using none other than a Nissan NP300 Hardbody!

Numerous manufacturers have had the honour of creating the ‘pope-mobile’ over the years, and for the first time ever, Nissan was chosen. Nissan’s Mauritian NSC ABC Motors have the privilege of building the pope-mobile, which has been in use since 1965 when Pope Paul VI used one to greet the crowds in New York.

The Nissan NP300 Hardbody supplied by ABC Motors was sent to its subsidiary company, ABC Coachworks, to be worked on according to specific Vatican specifications. The Diocese of Mauritius oversaw the creation by the company, which was also first for them as they usually specialise in coach building, bus building, and modifying vehicles for police, ambulance, and fire-fighting specifications.

ABC Automobile Managing Director, Dean Ah-Chuen said they all put their heart into the design of the Popemobile as a family and ensured the design was worthy of its name and the Vatican’s standard. They are amazed by the outcome of the three months of hard work, and everyone felt a sense of belonging when they watched His Holiness in this Popemobile that they had crafted with their own hands. Dean Ah-Chuen also added, “We are so proud of having contributed, in our own way, to the arrival of the Pope.”

The Vatican’s decision to use the iconic Nissan Hardbody was a fantastic testament to the vehicle’s longevity and popularity in the African markets.

Jim Dando, Nissan Group of Africa’s Director of Sales and Operations said, “I’m particularly pleased too about the honour that was accorded to ABC Motors. They have been the Nissan NSC on the island for about 34 years – and in the last 19 years, they have been the market leader every year, except two. It’s a remarkable achievement in any market, but particularly Mauritius because of the highly competitive environment there.”

Normally, a market would have about 30% market share with one or two rivals chasing just behind them, but in Mauritius, ABC leads what is most likely the most competitive market in Africa – including South Africa – with between 14 and 16% market share, which means they have about 5 competitors behind them.

Since ABC’s establishment in 1985, they’ve won a number of Nissan award from sales, after-sales and spare parts. But the most noteworthy award is definitely the Nissan gold prize and the Nissan Global Awards in 2005 and 2007.

ABC Motors is a subsidiary of the ABC Group that was founded by Sir Jean Etienne Moilin Ah-Chuen in 1931, and the group is one of the top 25 business conglomerates in Mauritius and employs more than 1400 people across five clusters that include food distribution and manufacturing, automotive, banking, financial services and, shipping & logistics. ABC Automobile employs almost half the group’s staff and the largest group.

The Nissan NP300 Hardbody with its unique SCV1 number plates, an abbreviation of the Latin Status Civitatis Vaticanae (Vatican City State), will be on permanent display as a memento to the pope’s visit by the diocese.