The recent Tokyo Auto Show in Atsugi Japan, saw the launch of Nissan’s ambitious aim to become not only a leader in the current market but to also drive the industry to the future of vehicle automation and energy conservation.

Nissan Concepts
The hatchback on display included Nissan’s prototype battery with twice the capacity of today’s Nissan Leaf power - allowing drivers to drive further on a charge. The second part Nissan unveiled to the public, is their ambition to have autonomous vehicles on the road by 2020.

Eradicating Human Error
Nissan foreshadowed their Intelligent Driving concept that borders on autonomous driving and a degree of artificial intelligence (is anyone else thinking Kit from Knight Rider?) that could eliminate the amount of accidents caused by human error and driving incompetencies.
CEO Carlos Ghosn says, “Nissan Intelligent Driving improves the driver’s ability to see, think and react. It compensates for human error. As a result, time spent behind the wheel is safer, cleaner, more efficient and more fun.”

The IDS Nissan Concept
The concept vehicle will offer two modes of driving - manual for traditional driving - as well as Piloted, whereby the steering wheel and instruments hideaway - to give the vehcile a clean look while driving autonomously.

More than that, the interior of the vehicle rotates the seats to create a more intimate feeling (much like face-to-face british taxi’s are doing) and leaves the occupants in the safety of laser scanners, cameras and sensors to drive them to their destination in comfort and sleek styling. 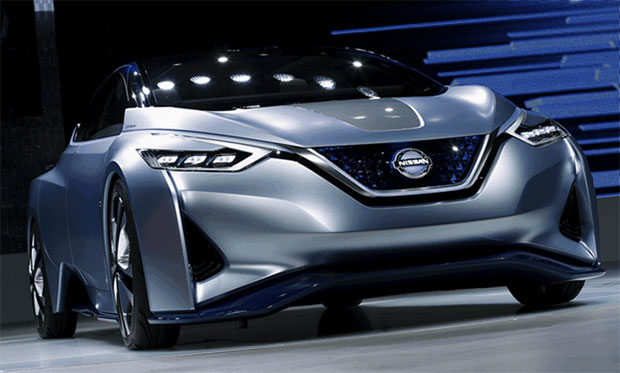 Artificial Intelligence
Nissan has piloted their concept vehicle technology under an Intelligent Driving umbrella that includes:

Better Battery Life
Although the IDS Concept is based mostly on future technology, the electric drivetrain is close to becoming a reality. The 60kW/hr lithium-ion battery has already started undergoing road testing and is close to production. With double density and increased capacity, the new battery will boost the range drivers can experience in electric vehicles - today.

The Future of the IDS Concept
Much of the technology in the concept vehicle is already being tested in small batches. This includes changing lanes, passing cars, parking, intersection, handling traffic and merging on the highways. The technology is still catching up to the imaginations of the designers and engineers, but we are excited to see what the future holds for Nissan and our customers.

William Simpson Cars believes in the award-winning lineup of Nissan vehicles on offer, and although they aren’t driving by themselves ...yet, we know that we have a vehicle that can make your life easier with versatility and comfort combined - to suit your business and personal needs.